Better Your Brews with Brew-Specific Design

When the difference between a gold-medal IPA and something that sits on the shelf is one degree, one measly little degree of change in temperature, you can see why brew-specific design engineering is mission critical.

Portland, OR craft brewer Breakside Brewery understands just how important the design is to the success of its brews – it was named Brewery of the Year two years in a row by the Craft Beer Awards, taking home 11 medals in 2018 alone.

For Breakside’s Slabtown location in Northwest Portland, the brewery presented a fun challenge to ICC-NW: Build a 10-barrel R & D brewery on a footprint “that was probably the smallest we’ve ever seen,” says Brandon LeBlanc, ICC-NW engineering manager, while supporting their ability to produce award-winning flavor profiles.

ICC NW has all your brewery design needs covered—even engineering for the exotic. 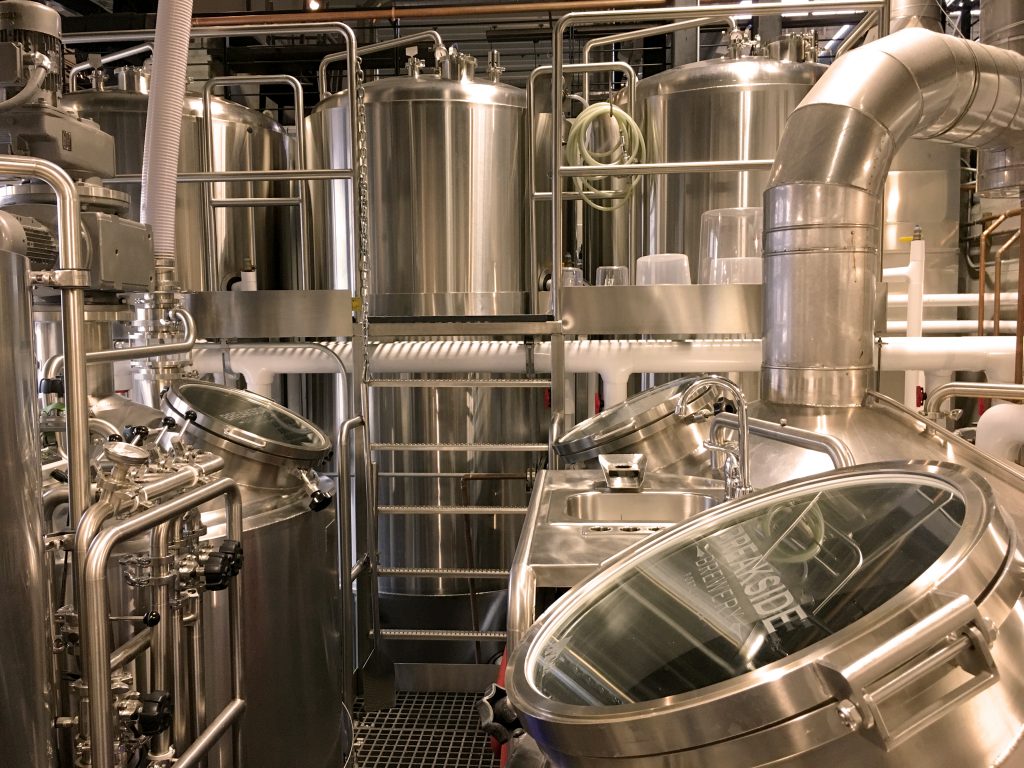 For this R & D brewery, Breakside had a very specific wish list. And ICC-NW’s engineers had the solutions:

Eliminate mash kettle—To save space, the mash kettle was eliminated in favor of including a dedicated whirlpool in the brewery design. “Normally, if you want to have complete freedom for every style of beer, you’d have a mash kettle and then a lauter tun,” says LeBlanc. “To preserve the function of the mash kettle, we designed a way to recirculate the wort in the lauter tun that allows for ramp/soak style step mashing.”

Preserve aromatics—“IPAs are all about bringing a lot more bold and complex flavor, so we’re always exploring ways to extract more from the hops,” says Breakside Brewmaster Ben Edmunds. “To preserve and capitalize on the finer volatile oils within the hops that normally flash off at lower temperatures, we wanted to be able to cool the wort before it reached the whirlpool.”

LeBlanc designed a hop oil calculator to determine which compounds would be present at certain temperatures. “We figured out that you could use a shell and tube heat exchanger to cool the wort to whatever temperature you want before it gets to the whirlpool,” he says. “This gives you access to about 50 percent more possible aromas to introduce into the wort at the whirlpool.”

“By cooling the wort to within a very tight tolerance, the ICC-NW engineers gave us the ability to capture woody, floral, tropical, grapefruit, and other lower flashpoint oils,” says Edmunds. “We’re offering huge flavors that are unmistakable when they hit your tongue.”

“But, this being Breakside, why stop there?” says LeBlanc.

Extract more aromatic oils—They took it one step further. Using a portable hop back, Breakside can extract even more oils at lower temperatures. After spinning most of the biomass out in the whirlpool, everything that’s left gets rinsed through the hop back to capture even more flavor and aroma while trapping proteins and biomass that shouldn’t be sent to the fermenter.

The ICC-NW design also addressed the logistical and more tedious operational concerns of any brewery: handling the overwhelming amount of hops and biomass in a modern brewery, delivering hops into the tank without introducing oxygen, and most importantly, designing to meet and exceed safety and sanitation standards.

“Breakside was a really intense design engineering job because it required a lot of modulating valves and control mechanisms that are not common in many breweries,” says LeBlanc. “But at the same time, this project was an engineer’s playground and supporting Breakside’s development of the best IPAs by implementing the latest technology and design solutions is what we do best.”

ICC NW is an engineering and design partner you can trust to create visionary, compliant, and cost-efficient solutions. Click here to learn more.
Tags:
Back to Top
Recommended Posts

We’re growing! Check out our career page for current openings: